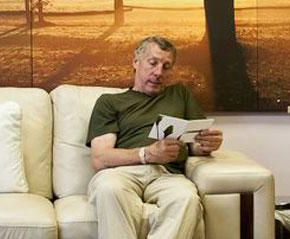 My journey began in 1969 when I qualified in Swedish remedial massage. This introduction to the complexities of the human body inspired me to further my studies and in 1974 I studied remedial sports massage and manipulative therapy, and I then went on to qualify as an Osteopath in 1984.

Over the next 10 years I attended many seminars on osteopathic and chiropractic techniques. At that time some research was presenting the idea that the standard thrust manipulative techniques of osteopathy may not be necessary.1 This research fascinated me as it was a less forceful approach and also seemed kinder to the body. These gentler techniques utilised body positioning and the tensegrity of the tissue to facilitate the correction. One of the eminent researchers at this time was Dr George Goodheart, a chiropractor, who studied and utilised eastern methods of therapy and from these theories he developed new physical techniques to match the criteria. From a basis of ancient Chinese meridian theory, he developed a series of muscle tests that correlated with the diagnostic method of pulse diagnosis used in acupuncture. This was to form the basis for Applied Kinesiology (AK) which he originated in 1964. 2

These AK muscle tests soon became a reliable and empirical backdrop to enable a deeper understanding of the links between eastern and western thinking. Goodheart also demonstrated the effectiveness of the AK muscle testing techniques as a reliable form of diagnosis and post checking of a treatment’s effectiveness. This ground breaking research and the evolution of new techniques firmly based on ancient fundamentals sparked my interest in eastern methods of therapy and lifestyle.

In the 1970s I had also began studying Japanese karate. During my studies, I discovered many of the Japanese masters of karate were also doctors of Japanese medicine. In 1985 I began to study an ancient form of Japanese warrior principles. The grandmaster of this school was a Dr Masaaki Hatsumi who was the holder of ancient scrolls of nine schools of martial arts and a school of ancient medicine.

I initially met with Dr Hatsumi when he came to England for the first time in 1986 to demonstrate his martial arts principles. Although his martial skills were amazingly effective, another quality shone from him. He was gentle and his body movement was graceful. He seemed to have plenty of time to evade attacks made on him during demonstrations and seemed to float as he walked through various techniques.

I watched in awe as a man 20 years my senior, worked with ease and fingertip precision to lock his opponents in tangled body configurations. I then learnt that this man practised as a therapist and this made me think seriously as to his methodology. As he practised martially, he would say “Budo… [martial] and medicine are the same!” He told us to study nature and learn from nature, and that natural movement was all that was required to maintain health and to defend oneself effectively in combat. 3

That day in 1986 changed my outlook forever. I had found my mentor, a man who practised my hobby and my occupation and described them as being one. I changed from hard, physical, disciplined karate techniques, to a softer, evasive body defence method. This also influenced my decision to stop practising the standard manipulative osteopathic method and study Dr Hatsumi’s natural movement approach.

I utilised body positioning and gentle movement into my practice methodology and I began to get the results I wanted from this amazing body orientation approach. In 1995, I went to visit Dr Hatsumi to ask for guidance and the opportunity to demonstrate these principles to him. He was impressed with my progress and started to teach me on one to one basis. He then granted me the Menkyo Kaiden (full teaching rights) of the ancient school of Hichi Buku Goshin Jutsu Ryu.

In addition, during the 1970s, Dr Oschman PhD, began to study the effects of pressure on the tissues of the body. His breakthrough in cellular make-up led to a new understanding on the evolution and makeup of body tissues. It also demonstrated the scientific basis for the interconnectedness and continuity of all parts of the living organism.4 This was another valuable piece of the puzzle in my quest for Dr. Hatsumi’s natural movement principle.

Also in the 1970s, Dr Stephen Levin conceived of the ‘Law of Tensegrity’ entitled biotensegrity. This law states that the body is a tensegrous structure, implying that the soft tissues of the body provide tension and the bones and incompressible fluids in the body compartments provide compression. 5

Hence, the laws of physics and tensegrity created a base of evidence to support the concept that correctly angled and controlled pressure could change the nature of the bodies’ soft tissue when it is in trauma. The common denominator between this western scientific research, and the ancient eastern art of healing in which Amatsu has its roots is that Dr Hatsumi utilises both martially and clinically a pressure technique described in Japanese as San kaku jime.

This tactile pressure (San kaku jime,) when applied to the body’s soft tissue, allows the practitioner to engage with the soft tissue without resistance and initiate movement at an injury site, in order to release spasms and restrictions around the joints. It also reconnects proprioception to the previous injury site as part of its protocol. Proprioception is the body’s internal sense of the physical self and a ‘knowing’ of where all parts of our body are at any time. It is essential to rehabilitation, whilst also accelerating the body’s balance to movement and healing. 7

I originally coined the phrase Active Balance as the name of my clinic as it described the link between movement integration and well being and in 1989 I wrote a book called Active Balance: Body-Mind Integration for client’s home rehabilitation. I have written several articles on the nature of our upright evolvement and its maintenance in health and longevity and am a contributor to the Biotensegrity Information Group, which presents papers annually in order to further research into biotensegrity and health. I have actively taught therapeutic principles since 1986, and from 1995 headed Amatsu therapy schools to teach both practitioners and teachers the art of Amatsu and thereby initiate a network of Amatsu practitioners spanning England and Ireland.

Copyright All Rights Reserved © Amatsu Therapy 2016
Back to Top
Enter your Infotext or Widgets here...